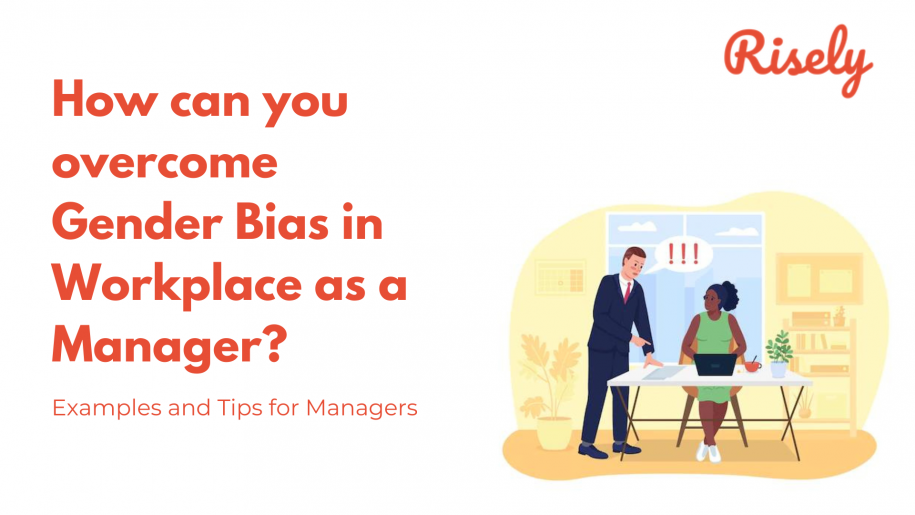 How can you overcome Gender Bias in Workplace as a Manager?

As we discussed in one of our earlier blogs, bias exists in everyone in some form or the other due to constant conditioning over the years. Consequently, bias unintentionally affects our decisions without even us recognizing the same, even when trying to be our best rational selves. Gender bias in the workplace can have a detrimental impact on our decision-making and interactions too. This is even more pertinent for those in leadership or managerial roles. Therefore, it is imperative to take extra care to weed out bias from our minds before embarking upon your next venture. You can read more about the most common forms of biases seen in the workplace here. As a manager, ensuring that everyone in the workplace is treated equally and fairly is one of your main tasks. Unfortunately, this isn’t always easy, especially when gender bias exists. Gender bias can take many forms, from straightforward chauvinism to subtle discrimination. As a manager, it’s essential to understand the effects of gender bias in the workplace on work performance and how to tackle it head-on. Because otherwise, it will create a blind spot for you. In this blog, we’ll explain what gender bias is, how it can impair a manager’s work, and some tips on overcoming it. So, whether you’re a new manager or experienced, read on to learn more!
Table of Contents

What is Gender Bias?

Gender bias is a problem that exists in many workplaces, schools, and other environments. Gender bias, or sexism, is differential treatment from stereotypes and consequent prejudices surrounding your gender. It occurs when men, women, or other genders receive different treatment because of gender identity or expression. However, the problem can affect anyone. Women are mainly at the receiving end of discriminatory behavior. After that, people belonging to genders other than males end up being victims of sexism. Their plight essentially goes unnoticed owing to the little recognition given to the community. You can take some steps to show support to your LGBTQIA+ colleagues. Gender bias is also referential to the inexplicable preferences afforded to men over others. There are many ways that gender bias manifests itself – for example, through exclusion from leadership roles or pay disparities. In extreme cases, it can take the form of harassment as well. Gender bias can have a significant impact on the work performance of workers. For example, studies show that females are less likely to get promotions than their male counterparts. This is likely due to factors such as disbelief or skepticism about their capabilities, lower trust levels, and a lack of confidence in their ability to lead teams effectively. Effectively, this discourages qualified candidates from attempting to take up these roles and severely reduces their representation. Gender-biased attitudes can also lead to poorer team morale and productivity. In addition, research shows that female managers experience burnout more frequently – an illness characterized by physical and emotional exhaustion caused by stress, as their capabilities are repeatedly tested.

Bias is dangerous because it works subtly. This is simply social conditioning to achieve the desired results without any policy intervention. Sometimes, the person doing it and the victim might not even realize it. Over time, it becomes a tendency and gets normalized all around. However, keeping a keen eye on and recognizing instances where bias is a motivator is crucial.

Examples of gender bias in the workplace

How can Gender Bias hamper a Manager’s work?

It becomes crucial for a manager to tackle gender bias because of the problems it can present for you. First and foremost, diverse teams are often more productive than homogenous ones. The scope for creativity and innovation is manifold higher. Resultantly, a diverse team promises better performance and productivity. However, creating a diverse team is contingent upon the absence of gender bias. Moreover, gender bias can harm the external perception of the team and the people, which is unsuitable for the manager. A manager or a leader needs to get of gender bias if they wish to succeed. As a manager, it can be challenging to combat gender bias. It manifests itself differently, but all share one common goal – to advance their colleague’s careers. Unfortunately, this goal becomes difficult when everyday interactions unconsciously apply and reinforce gender bias. To overcome gender bias, managers need to understand how it affects them and make positive changes that will benefit the entire team. This can be difficult, but by taking the time to understand the problem and put in the effort, managers can create a more inclusive and equitable workplace for all employees. There are many steps managers can take to achieve this, but the most important thing is to start somewhere.
Other Interesting Reads

Ways to tackle Gender Bias in the Workplace

Gender bias can be a tricky issue to tackle, but it’s essential to start somewhere. Here are five ways to tackle gender bias in the workplace:

Begin the process of tackling gender bias by acknowledging the presence of the issue. Additionally, you can provide data to understand it better. The next step would be to collect employee opinions to understand their lived experiences as persons of gender that are biased against. This will throw light on numerous issues ranging from interactions in the social space to disadvantages observed in the administration of pay and perks. This informal understanding of issues can pave the way for a formal investigation upon which amendments can be based.

Similar to your organization, you can test your hiring process to see if it suffers from gender bias and to what extent. In this, you can ensure that you use gender-neutral language and themes and that your questions are not based on experiences central to any particular gender. Encouraging blind applications can be a great tool to increase the number of women. Lastly, go into the interview process with an open mind, absent of preconceived notions of ability specific to any gender.

Taking the first few steps won’t be the end of it; eradication of gender bias will take a long time. Therefore, it is vital to keep the conversation going on. Ensure all employees feel comfortable reporting any gender bias they experience. This will help you to identify and address any problematic behavior quickly and appropriately. This can help to create a more open and understanding environment and ultimately help to reduce gender bias in the workplace.

If you see differences in the rewards given to people along the lines of gender, your program needs a redesign. Reward employees for working hard without privileging one group over another. You should enable an environment where every employee can equally access opportunities for personal and professional development.

We have understood that bias occurs due to social conditioning over time. Therefore, undoing it might not be the fastest process. A manager can then offer training against underlying biases to employees. This can be in the form of awareness programs, discussion forums, and sensitivity training that educates them about the various manifestations of gender bias and its impact. This exercise empowers employees and allows them to challenge bias head-on.

Practice active listening to know your team and their concerns.

Download the free active listening toolkit to unlock crucial insights on your teams. The Best Leadership Development Strategy For Managers Have you ever wondered how managers can lead better? They are constantly challenged by the ever-changing business environment, volatile employee needs, and an…
Read More

What Is Leadership Development? 5 Reasons Why Every Manager Needs It

What Is Leadership Development? 5 Reasons Why Every Manager Needs It It is not enough for managers to be good leaders. They must develop their leadership skills to keep pace…
Read More

8 Essential Leadership Skills For Every Great Team Manager Although leadership skills are often talked about, written about, and hoped for in business, many leaders lack these skills. It leads…
Read More

What Is A Leadership Vision Statement? 5 Examples And Template

What Is A Leadership Vision Statement? 5 Examples And Template Have you ever been around a great leader, and it’s like they have this magical way of seeing the world?…
Read More Major Distractions In Workplace That Are Hurting Your Growth

Major Distractions In Workplace That Are Hurting Your Growth There’s no doubt that distractions at work can have a negative impact on your productivity. In fact, they’re often cited as…
Read More

Do you have healthy boundaries in the workplace?

Do you have healthy boundaries in the workplace? Boundaries are an essential feature of the workplace nowadays. They ensure the well-being of workers as well as team cohesion. However, while…
Read More

How to find a great workplace accountability partner?

How to find a great workplace accountability partner? Every team is looking toward a straightforward goal – greater productivity. Being efficient in a way that leads you to productivity requires…
Read More

Is your workplace psychologically safe? 7 signs to watch out for